Peta identifies as a non-binary, trans-masculine guy, and is a pastor for the Metropolitan Community Church and a care worker. Whilst he dresses for care work in comfortable clothes that he doesn’t mind getting bleach on, church is an opportunity for him to dress smartly and express himself – but only to an extent. ‘I try and run a fine line between overdoing it where I’m basically distracting from what they’ve come to do, which is pray and listen and worship, but not dressing down so much that I’m disrespecting the role that I’ve got.’ 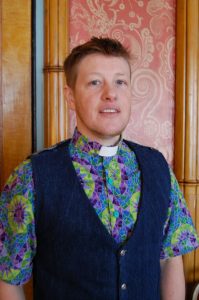 Have there ever been any negative reactions to Peta’s outfit choices in church? ‘One of my shirts was apparently too lurid – I do go for bright colours. I’ve never had outright objections to anything else, except that some people didn’t understand why I’d put the trans flag colours on my clergy collar for Trans Pride and Trans Day of Remembrance. They thought I was disrespecting the collar. But I had them there for a very specific reason, which is that, understandably, the trans communities have a suspicion of religious people and religious leaders and I needed to make it clear that I was there as a supporter and as part of the community and not somebody who was there to give them a hard time.’ The negative reactions won’t put Peta off displaying his support loud and proud again next time round. ‘I might make a shirt out of the Trans Pride flag and wear it with a plain collar. That would be fun.’

Peta’s never really struggled to marry his career as a pastor with his self as a trans person. ‘They’ve always gone together. For me personally, my journey to understanding who I was and being a more authentic me was a spiritual journey. I’ve had the good fortune of always being part of very open and slightly radical churches in that they tend to push the theological edge of the envelope a bit, quite cheerfully. They’re not scared to ask difficult questions; they’re not scared to say “Maybe the way we’ve always read this might not be the best way to actually understand what this is saying.”‘

When not in church or caring for people, how does Peta use clothes to communicate his identity in his free time? ‘I wear a lot of colour. I love colour. I do have my selection of Trans Pride t-shirts when I feel like making a point. I’ve got my Stonewall one: ‘Some people are trans. Get over it!’ – if I’m feeling particularly aggressive.’ These t-shirts usually come out of the drawer whenever Peta’s angry about transphobic news and current affairs – which, unfortunately, seem to have been constant in the last year. 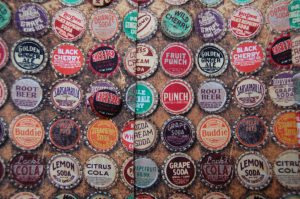 Peta’s Queer Look is a pair of black jeans (still satisfyingly black thanks to their newness), a black homemade clergy shirt and a wine red satin-front waistcoat with the back and pockets covered in a fabric printed with imagery of old-fashioned soda bottle caps. And how would an ensemble like this one be accessorised? With very boring, sensible shoes, first of all. ‘I think that’s the last remnant of growing up a lesbian; I wear very sensible shoes,’ Peta laughs. Like this shirt and waistcoat, a lot of Peta’s clothes are homemade. ‘As a trans guy, finding clothes that fit is a nightmare. I shop in charity shops and I make things. That’s pretty much it.’