‘Instead of mutton dressed as lamb I think of myself as ewe dressed as ram.

Luc(e) identifies as transgender, queer, androgyne, non-binary and sometimes, as electively hermaphroditic. They moved to Brighton seven years ago from Totnes in Devon, where they were ‘the only andro in the village’, to explore living in a large trans community and to adopt an activist role. Reflective of this is the ensemble that they’ve donated to Queer Looks; the outfit they wore to Brighton Trans Pride 2016. Luc(e) describes this get-up as playing on the Trans Pride flag with its blue and pink colour scheme, and as both gender-free and reinforcing ‘masculine’ and ‘feminine‘ stereotypes at the same time; a flowy, dressy top meets masculine trousers and a panama hat, alongside lipstick and the sort of armbands we associate with male croupiers. 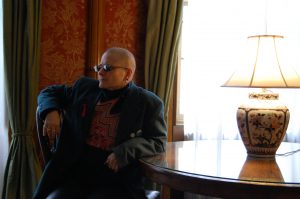 Badges were also a hugely significant aspect of the outfit, as they allowed Luc(e) to make a clear statement about being a trans person. ‘I’ve got a rather large lanyard, self-made, that says ‘TRANS PERSON’. It’s what I called my ‘tranny lanny’, and that was before ‘tranny’ was a complete ‘no’ word.’ Luc(e) also used to pull behind them a red shopping trolley that they referred to as their ‘tranny trolley’ (they were the ‘trolley tranny’). ‘When you live in a small town and you’re coming out in 2007 there’s no awareness of non-binary. I would have to make jokes to try and make it easy, as a way of “not thrusting it down your throats” and to get people thinking about it.’ 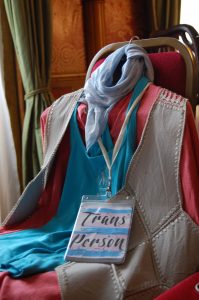 t defines my queer look is “a mix between hip-hop bling and twinset and pearls”,’ Luc(e) chuckles. ‘I’m middle-aged and yet because I’ve transitioned medically, which gives you a second puberty in your fifties, it means you’re kind of teenage.’ The most important aspect of Luc(e)’s look is colour coordination. ‘I’m a person with Asperger’s and colour is kind of my ‘geeky’, obsessive speciality. I can’t even go and do gardening without my socks coordinating with my coloured boots. Texture is also more orgasmic to me than anything.’ Luc(e)’s hyper-sensory sensitivity is also reflected in their way of dressing, as the outfit they’ve donated exemplifies; the panama and sunglasses protect from the sunlight, the sleeves protect from the breeze and sun rays, and the satisfying clinking sound made by the heavy jewellery offered great pleasure.

It wasn’t until the age of 48, after two suicide attempts, that Luc(e) was able to finally make the surgical transition they had been so desperate for, and begin coming to terms with their identity. But even then, ‘there was no language or role model for me to identify wit 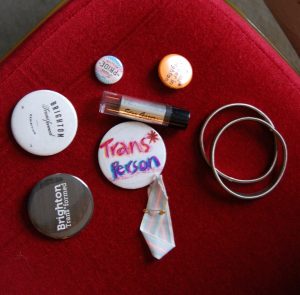 h.’ Now, Luc(e) feels that the speed with which trans acceptance has progressed has been far quicker than that of homosexuality. ‘It’s like humanity’s speeding up and getting it.’ And, it’s undeniable that this is largely thanks to hard-working activists like Luc(e). They were part of the Brighton Trans Scrutiny process and have been running colour- and recycling-based creativity wellbeing courses for trans people on the autism spectrum. ‘I’ve been an activist in a city that’s leading light. But every year when it’s Trans Day of Remembrance in November we’re still remembering 300-400 trans people a year who have been murdered for being trans. It’s not alright elsewhere. I’m very aware of our privilege here. I think it’s so important to get things normalised here and hope for this ripple out.’

Luc(e)’s grandparents managed an Oxfam shop and as a young person, they enjoyed plenty of freedom to experiment with clothing. The Elizabethan-style velvet Prince Charming outfit hand-made by their grandmother was hugely important to them. ‘Internally, I think that outfit was a role model. Internalised, rather than looking out to someone.’