‘Why don’t I just go to town with what I wear? At the end of the day, I’m going to be judged regardless.’ 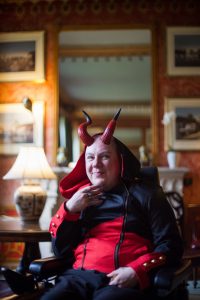 Despite rocking up to his interview wearing a wicked pair of devil horns and a hooded assassin jacket, Tyler feels that nowadays, dress is ‘more for comfort than for looking pretty.’ ‘The wheelchair now means that I have to have items that I can get off quickly if I need the toilet, or can take day-to-day wear and tear in this machine.’ In short, Tyler would describe his style as ‘comfortable goth’. But, it hasn’t always been this way. ‘Before, I used to be all-out with huge, brightly-coloured hair. But, as the body decided to decline, the ability to dress however I wanted to became harder and harder.’

Whilst comfort and practicality are now top priorities, Tyler, who identifies as trans and gay, does still enjoy dabbling in experimental self-expression. ‘Dressing normally was never a thing for me because I was never going to be seen as normal. I’m gay, I’m trans, I’m in a fucking wheelchair. If you’re going to stare at me I’d rather you stare at me because of something I’ve intentionally done to myself, rather than my disability.’

Tyler, who is an ordained satanic minister, also feels it’s important to utilise dress as a means of subverting restrictive stereotypes. ‘Being LGBT doesn’t have a set look, or a set image. We’re not all family-wholesome, as new media wants to portray us – especially gay folk. They want us to have a family; marriage; 2.4 children; being able-bodied; a 9-5 job. And let’s face facts: a lot of the time we are seedy little bastards who go to saunas, who fuck what we want, enjoy leather, have tattoos… We’re not all going to be mainstream, wholesome material. We’re all different and that’s perfectly okay.’

Tyler is smothered in tattoos, including the words ‘SELF MADE’ on his fingers, an otter on his leg (‘because otters are just amazing’) and his newest 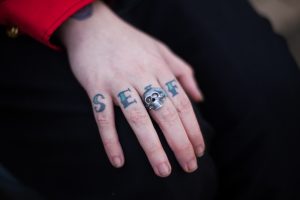 piece; an octopus. ‘What’s more hilarious than someone who can’t use their legs with eight legs tattooed on them?’ Tyler’s eventual love of tattoos stemmed from being a chronic self-harmer a number of years ago; a symptom, in part, of excruciating dysphoria. After his first tattoo, Tyler thought to himself: ‘I kinda like tattoos and I’ve kinda gone off self-harming now. What’s the point in cutting myself when I can just get something that looks pretty?’ Now, whenever he’s feeling particularly rubbish, Tyler treats himself to some new ink.

In previous years, Tyler’s style was heavily influenced by Marilyn Manson and the metal scene. And nowadays? ‘Boy George has become really fuckin’ attractive for his age… If I look like Boy George now, then I’m doing quite well. My influence right now is a lot of the current gay scene.’ Tyler wasn’t too up for experimenting with clothes when he was younger, though; ‘Mainly because I thought my body was weird. Having puberty with 42G tits was not helpful in the least. You can’t dress anything with them – they’re in the room before you are.’

To the Queer Looks table, Tyler brought a chunky silver ring shaped like a skull. To him, it’s a significant piece because it’s the ring he used to propose to his partner five years ago when too skint to buy a ‘proper’ engagement ring. 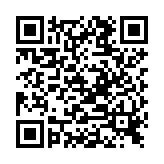