Ryan grew up in Birmingham and later in life went on to have a successful dance career in London during the ’80s, arriving at the city’s gay scene, which he described as a ‘masculine environment’ at the time. He worked in theatres in the West End and at the weekends enjoyed the London nightlife, hitting clubs such as Heaven. 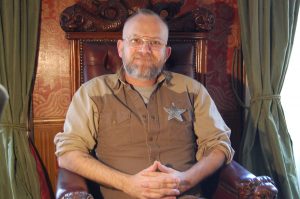 His chosen garment is a sleeveless Stüssy t-shirt. He cut the sleeves off himself and wore it during a time of trying to comply with nightclubs’ masculine environments. This resulted in Ryan feeling apprehensive to even tell others about his day job as a dancer because of the feminine connotations it might have carried. He told us that during this time he found himself wearing outfits consisting of a lot of branded Stüssy clothing. This skater look, including the sleeveless t-shirt, would have been worn with Stüssy belts, baggy jeans and Nike Air Max trainers, as this was what he saw as more acceptable amongst his peers. He liked everything that the Stüssy brand said about a person wearing their clothing, with the cool impression it gave and the cool persona it sold to their audience. When he wasn’t dancing, his everyday style was fairly casual, mostly consisting of a t-shirt and jeans.

Post-London he moved to Brighton after having a career change in the late ’90s to study design, including production, ceramics and plastics, and by chance he fell back into working in theatre – but this time working on set designs and costumes. His previous ‘London look’ is no more, with his current style being very casual – although recognises the Stüssy brand recently coming back into fashion through a younger generation. The brand still carries the same cool skater style; current and appealing. He explains that he wouldn’t wear an outfit like his Queer Look now, and would probably never revisit this style again.

As for identity, Ryan describes himself as ‘a gay man in his early 40s’, and in more recent years, has been open to appearing queer. His casual style now incorporates characteristics from his job, with looks he sees on stage appealing to him, including details such as dyeing his socks with tea. He combines this with a flamboyant element, like his small variants of sparkle, stars and glitter. Something that he’s grateful for is the freedom of expression Brighton brings, as this city has an accepting nature.

The first of the tattoos Ryan accumulated was to signify the positive change in his life from dancer to designer. He wanted to rebel against the image he had to conform to in his dance career and wanted to express the freedom to choose how he looked for the first time after such a regimented appearance as a dancer. This was a journey he embarked upon in his 30s and it’s meant he’s got to a point of accepting who he is – not trying to be anything other than himself to ‘fit in’ or gain the approval of others.

This blog post was written by Zoe, a member of the Queer Looks Young Project Team.