Andrew’s always been keen on dressing up and standing out from those around him. As a child he despised having to wear a school uniform. Sixth form and its lack of uniform policy came as a huge breath of fresh air and it was at this point that Andrew began cutting a dash in smart, tailored garments. ‘I went from being this rebellious, tatty schoolboy to this very flamboyant schoolboy in bright colours and bow ties… I can remember walking into school in this beautiful suit and a shirt and a bow tie, looking really smart. It was the era of brightly-coloured heels with platforms – and I’m 6 ft 2. I was suddenly 6 ft 7, in a pinstriped suit with a bright yellow shirt and a brown velvet bow tie. The headmaster just looked and said “Oh, for god’s sake, Kay. You’ve looked an absolute mess for five years and the minute we let you dress how you want, you come in looking amazing”.’ 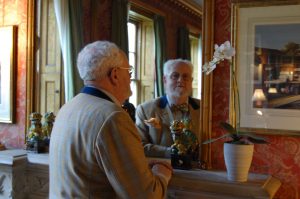 This desire to turn heads has always been tied more to Andrew’s creativity than to his sexuality, he tells us – though as he begun fully coming to terms with his gay identity, dressing up became a fun thing to do. ‘Going out clubbing in my 20s in London, we all really dressed up. There were no trainers, no casual clothing culture.’

There are a lot of gay men who find solace in blending in, Andrew feels. He’s never been one of those men. ‘There are some of us who never bought into that. We were also the ones who got spat on on the tube and kicked in the street, but we were the ones who weren’t trying to hide anything, and that’s the difference.’

Andrew observes that, historically, a lot of looks that originally surfaced in the gay scene have become absorbed by the mainstream. Take the 1980s ‘Clone‘ aesthetic of Lacoste polos, Levi’s jeans, Timberland boots and yard brush moustaches, for example. Before long, these aspects were worn by all men. Andrew recalls walking down the King’s Road at this time and not being able to tell who was gay or straight.

It’s not just iconic gay fashion looks that have dissolved, either. Camden’s The Black Cap, one of Andrew’s gang’s haunts in the ’80s, was closed down in 2015 ‘in a great storm of anger from the gay community’, after showing drag for 50 years. ‘There’s a sudden realisation that our gay history and culture has to be preserved,’ Andrew tells us. ‘Which is what’s exciting about this project.’ Referencing Berlin’s Schwulesmuseum‘s recent exhibition Public Toilets, Private Affairs, Andrew points out that there are interesting and hugely significant parts of gay history, such as sex in public toilets, that should not be swept away or sanitised. ‘People are too keen at the moment on tidying us up and making us look like: “Oh, they were never difficult. Why’s everyone making a fuss?” Things were difficult and we did things that perhaps we wouldn’t do now.’

Andrew’s Queer Look is a frilled shirt that he used to wear clubbing. ‘It was around the time of New Romanticism and it’s a big fencing shirt and it’s completely outrageous. I used to wear it all the time with knee-length black boots that had chains on them and very, very baggy dinner trousers with stripes, and a leather biker jacket over the top. It was one of my favourite looks.’ This wasn’t the only look, though – not by a far stretch. Andrew’s style would shift from one week to the next; along with his hairstyles, facilitated by wigs and hair extensions. Today, his love of mixing things up still remains. If he’s not combining spots with checks, he might pair a full suit with a t-shirt. 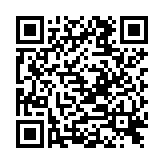