Micheal was born in Northern Ireland during WWII – in circumstances he is still trying to piece together – before being evacuated to Plymouth, where he spent his childhood. He moved to Brighton circa 1996. Why? ‘I’d spent all of the ’80s and a lot of the ’90s working as a volunteer at St. Mary’s Hospital, London. I was a hospital visitor.’ One Christmas in the early ’80s, Michael had phoned his first gay friend – ‘my Terry’ – who told him that he was HIV positive. Michael joined Terry on Body Positive Training, which offers support to those living with HIV and AIDs, and before long, found himself as a coordinator for hospital visits. It was difficult to encourage volunteers to commit, Michael tells us – he found himself spread thin on the ground, visiting numerous hospitals. ‘It was an absolutely frantic time. I saw my first dead body aged 40, very unexpectedly. I was fortunate and happy enough to be at the death bed of three friends of mine. Two of which, I was holding their hands as they died. I find that a great privilege. We weren’t just hospital staff; we were a group of friends. We went out together, we socialised together, we laughed and cried together. I was just a volunteer, but I was part of the family.’ It was a highly charged period of his life, Michael tells us. ‘There were so many people dying. I was sometimes doing three or four funerals a week. It’s a heavy load to bear but you don’t realise at the time. It wasn’t until I came down here and had the nervous breakdown that I realised what was happening. That whole era, 10 years or more – one of joy, and one of pain. The pain was suppressed, because as one person died, you had to be there because someone else wasn’t eating.’ 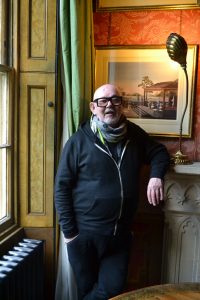 Michael’s Queer Look is an ensemble he acquired whilst living in London. It consists of a little leather waistcoat, a black vest, his lucky orange jockstrap (lucky because it always used to help him pull) and a pair of leather chaps, made by ‘skilled leather craftsman’ Ken Markle. This get-up is significant to Michael because it reminds him of his first boyfriend, David. ‘We fell in love, the two of us. He’d just come out at the age of 40, despite having an out gay brother. He was terrified to tell his father. Coming out triggered the leather jackets and the studs and the leather jeans. We discovered London Leathermen and went to have a pair of leather chaps made each and a pair of leather jeans. We used to go out together to leather clubs, and it was there that I discovered he was this virgin. All of a sudden he was into S&M and I thought “Where did that come from?!”‘ On moving to Brighton many years later, Michael continued to wear this outfit, to venues like Schwartz and Subline – but he’d never wear it now. Not just because his body shape has shifted with time but because, in his words, ‘I’ve got no interest now. It’s a part of my life that’s been and gone.’

This attitude reflects Michael’s general approach to style; flighty, fast-paced and eclectic. ‘I’m inspired by loads of things,’ he explains. ‘Anything that takes my eye. Sometimes wholly inappropriate, but because I like the look of it, I’ll wear it for a while – a year, might even be two years, then grow tired of it. For myself; not grow tired of it for its own design. I was a Teddy Boy after the war – I was a mod, a rocker. A drag queen.’ Michael spent some time performing as a queen called Scampii, in Manchester working men’s clubs and London pubs. He was working in Whiteleys at the time and befriended a Jamaican man who’d once made fishing nets for a living. Inspired, Michael bought some metallic fishing thread and paid his friend to make up a giant silver fishing net for him, which he embellished with sequins and wore as a backless, halterneck fishnet dress. ‘And then, it finished. I realised – I looked lovely, but I had no talent.’

‘It’s just a natural progression. As one thing finished, you saw what was happening, you played with it. I had a little hippie phase – a gay hippie phase. I’d design my own looks and feel no guilt about taking the look from a woman. If there was something that a woman was wearing I’d think “Oh, that’s nice.” In the ‘60s, Terry and I, bless his heart, got into fur coats.’

One scene that Michael’s never been into, however, is the rubber scene. ‘I hated rubber. I had a very bad experience with my one and only rubber garment and I’ve never worn rubber since. I bought a rubber t-shirt, went to The Bloc (the leather bar in which he ran the cloakroom for 10 years), came home at about four in the morning, lifted the rubber hem over my head and it got caught on my shoulder blades and closed in like a trap. It took me an hour – I was crying,’ Michael guffaws. ‘I thought it was gonna smother, encased in this rubber tube. And I’ve never worn it since.’ 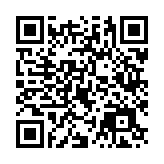