David has recently celebrated his 85th birthday but is still performing as Maisie Trollette, arguably Brighton’s most legendary drag queen. 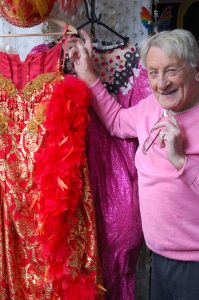 David grew up in and around Great Yarmouth, Suffolk. As a young adult, he co-ran his family pub with his mother, whilst also managing a local Co-op. David recalls the pub shutting at 10.30pm, leaving him an hour and a half to dash to Norwich on his pushbike to catch the tail-end of jive competitions, which would wind down at midnight. David loved dressing up in en Vogue ensembles for these trips, also keeping an eye out for what all the other suave men were wearing. In his twenties, David joined an amateur dramatics society and performed in a play whose producer was a gay man. It was via this social circle that David met somebody who invited him to manage the cabaret performances at the Gorleston Super Holiday Camp. At the camp, David met an engaged man named Ashley, with whom he became involved – his first gay encounter. Ironically, it was Ashley’s then-fiancée Brenda that David befriended and moved to London with some years later, leaving Ashley behind. David never came out whilst living in Suffolk – and never ever to his mother and immediate family. The small town mentality was suffocating, he tells us. ‘They wanted to know everything in those days.’ David remembers spending time with Brenda and people saying ‘Did you realise that she was at the pictures with so-and-so, a single man?’ Brenda worked in a hairdressers in Norwich and knew lots of gay men. She’d take David to a pub in town, which he quickly clocked was only ever full of men; and this was before he’d even come out. ‘It’s a theatrical pub,’ Brenda explained. ‘I don’t think we used the word ‘gay’ then,’ David chuckles. ‘We didn’t use the word ‘queer’. ‘Friend of Dorothy’s’ was a good one.’ 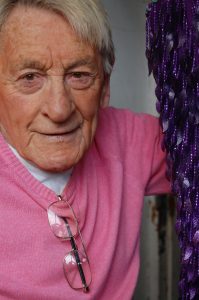 Soon, David was in Perth, Scotland, performing One Flew Over the Cuckoo’s Nest. It was here that he met the love of his life, Donald. ‘He gave up his bank job and translation job and came to live in London. 21 amazing years we had together until he had that bloody heart attack.’ When David landed a role in a Brighton-based pantomime in the 1970s, Donald suggested that the pair up sticks and buy a guesthouse in the seaside city. So, the couple became the proud owners of Rowland House in Kemptown’s St. George’s Terrace. They’d host brilliant parties on Monday lunchtimes, as Monday was the theatre’s ‘dark day.’ However, David was always conscious to run the B&B as a ‘straight guesthouse.’ ‘I kept my sexuality to myself because Don and I were two guys running a guesthouse. I didn’t want people just there on bloody Saturday nights. I ran it as a very good guesthouse.’

David’s Queer Look is the hot pink sequinned dress that he wore when performing as one of the Ugly Sisters in the Theatre Royal’s Cinderella pantomime in the 1980s. He’d wear it with gloves, a wig, a handbag filled with silly ‘send-up’ items and a pair of heavy duty theatre tights, enforced to enable high kicks. Maisie Trollette’s aesthetic is inspired by pantomime characters like these, centred on comedic value and a blatant avoidance of passing as a woman. ‘I like people to know that it’s a fella. I can get my makeup on in 20 minutes. I just throw my head back and let it land.’ In comparison to what it once was, drag’s an entirely different ball game, David feels. Nowadays? ‘Drag has become less family orientated. ‘The fun thing [used to be], that was your uncle – it wasn’t a real lady.’ But on the bright side, today, ‘There’s so much acceptance of drag. There used to be some bitterness.’

Casting his mind back to Maisie’s nights spent hopping from venue to venue, Donald by his side, David smiles. ‘When we used to go out and do the pubs, Don would say “Let’s make them talk.” He’d go out in a leather jacket with the studs; he always smoked a cigar. People would say “How on earth did Maisie pick up a gorgeous-looking guy like that? He was just wonderful.’

Nowadays, David categorises his day-to-day style of dress as ‘Complete straight, working-class man who likes a bet’ – he enjoys passing the time in the bookies. He feels as though he doesn’t appear outwardly gay. ‘I know I’m a bit camp but all of my closest friends are straight… Though there are guys who go down the bookies who I know are dying to come out. I wanna say to them, “You’re a damn sight fucking camper than I am.” They come to shows and they come to pantomime and they say to me, “What’s it like, then? Dressing up in all them dresses?” And I’ll say, “Come off it, you couldn’t keep your bloody hands off ’em when you were doing my house. They’ll say “I only looked at ’em!”,’ David laughs. 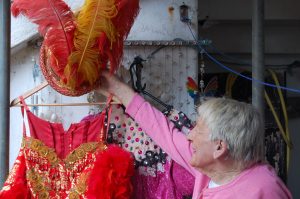 Both David and Maisie are well-known figures in Brighton’s gay scenes and party circuit. Will he walk in the Pride parade? ‘Walk? Walk?,’ he gasps. ‘Would you expect the Queen or the Queen Mother to walk? One leads the parade.’