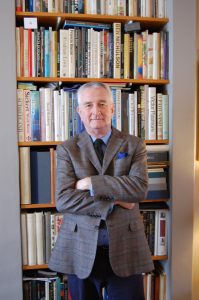 John, 70, was born in Keighley, Yorkshire, before his parents moved to Lancashire partway through his childhood. As a young adult he lived in London but felt that it suddenly became very threatening during the Thatcher era so relocated to Brighton, where he has remained happily ever since. ‘It’s so accepting of people’s difference. Two universities, with all their staff and all their students, has made it a very vibrant community – and it’s a community that’s been completely accepting of gay people. This is where I want to be and this is where I’m staying.’

John knew he was gay from a fairly young age and, perhaps uncommonly for the 1960s and ’70s, was engaged in a happy same-sex relationship in his teens. ‘When I was growing up, I started to have an affair with someone. We were both 16 and we knew it was illegal but we couldn’t quite stop seeing one another. We kept reading terrible things in the newspaper that were telling terrible stories about homosexuals, and nevertheless, I suppose I felt that it had to be different to what I was reading about.’ The pair remained together for 12 years, and it wasn’t until their late twenties, when living in London, that they finally established openly that they were in fact a gay couple.

John was unwell with a blood condition throughout much of this period, sadly spending a lot of his youth undergoing hospital treatment. ‘Having spent my teens in and out of hospital, being ill, having an operation, feeling very much like a fish out of water in a working-class community, I decided that every holiday, every opportunity, I’d put my thumb out and hitch-hike somewhere. It didn’t matter if I didn’t have much money. I’d go with just my mother’s leatherette shopping bag. It wouldn’t have much in it, apart from a very small sleeping bag. I used to sleep under motorway flyovers. I felt wonderfully free.’

In the 1970s, John hitch-hiked all the way to Iran, Afghanistan and Pakistan. Whilst in Herat he passed a shop where somebody offered to measure him up and make him a bespoke white cotton suit for a ridiculously cheap price. Shortly afterwards, John then journeyed to Kabul by a bus he shared with sheep, where he purchased a sleeveless jacket from another street vendor. ‘When I got home, [the outfit] held something for me about that trip. It was a constant reminder of the exploration I’d made, not just of countries but of my idea of myself.’ Together with his travel diary and his well-decorated passport, these items, stored safely now for over 50 years, are John’s donation to Queer Looks.

As a student in Liverpool, John dressed to separate himself as a young, trendy individual from society’s old wrinklies. This included avoiding tattoos at all costs, keeping his hair as long as his shoulder blades and dressing in quirky garments bought from the city’s Paddy’s Market, such as coats with tails. ‘I wanted a reaction. I wanted, as so many people in their twenties do now, to be looked at.’ At this time, John didn’t really look to any style icons for inspiration. ‘It’s about buying into fashion, or about having personal style. They’re very different things. I was fascinated by fashion so I went through the period when we bought things like safari jackets, which are now such an embarrassment. Then there were the high-waisted jeans. Then there was that cheesecloth – oh lord, cheesecloth. But the point is, I didn’t just simply follow fashion.’