‘I’m expressing myself through this exaggerated, glorified form of femininity.’

Ellie brought to her interview a pink and white vintage dress, a pink vintage bed jacket, a pair of ‘ridiculous’ pink platform shoes adorned with bows, and a flower crown – because Ellie loves flower crowns. Already you might have noticed a recurring theme. This outfit is symbolic for Ellie because she feels it encapsulates her and her style in a nutshell. This was also the outfit that Ellie wore when interviewed by BBC Politics on the day the Labour party’s pink bus visited Brighton. ‘What do you think of the bus?,’ the BBC asked. Ellie’s response? ‘It could be pinker.’ 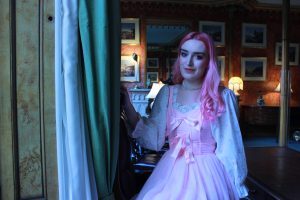 Starting to wear ‘over-the-top’, all-pink ensembles coincided with transitioning into somebody who loved themselves, expressed themselves and was wholly accepting of their identity, both as a queer person and as an individual – somebody that Ellie hasn’t always been. ‘I used to be very sad and not brightly-coloured. I went through a period of my life where I really hated myself and everything was just dark.’ Now, ‘I feel confident. I feel happy. I feel like I’m being myself. On a personal level, life is nice wearing this kind of outfit.’

Ellie’s distinctive look doesn’t come without its occasional hassle, though. Sometimes people take photos in the street or shout abuse, she explains – but these people are a minority in this city. ‘Brighton made it so much easier to allow myself to express myself and allow myself to start to love myself. I was in an environment that didn’t shun me for doing that. In Brighton I can walk down the street wearing a ridiculous outfit and hardly anyone bats an eyelid and you don’t get that anywhere else. To be able to be who I am in a very loud way without many people caring is just amazing.

Ellie doesn’t draw style influence from one particular source, but views anybody who expresses themselves openly as a role model, including strangers that she spots on the streets of Brighton & Hove and creatives that she follows online, even if their aesthetic isn’t the same as hers. ‘Other people who dress in any way that shows off themselves as a person is inspiring.’ Ellie also looks to Harajuku street style for inspiration.

Ellie doesn’t simply wear pink because she loves it (though that is a huge factor). ‘I dress in a hyper feminine way because it’s this hyper femininity that goes against stereotypes of who I’m “meant to be”. My style of dress goes against the stereotypes of being gay because it goes above the stereotypes of being feminine and being a woman. It’s a combatting of those stereotypes that put you in a box.’ Wearing pink and skirts and flouncy fabrics is an act of rebellion; taking all the ideas that have been utilised to restrict women, queer and non-queer, and flaunting them to such an extreme that they’re shoved back in the faces of those who have ever tried to oppress. ‘I’m gonna wear these and I’m gonna wear them so over the top that it’s more than you ever wanted me to do.’