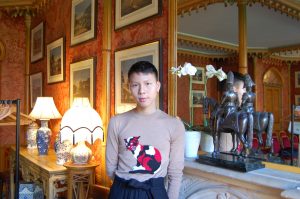 An is originally from Hanoi, Vietnam, but moved to Brighton two years ago for university, taking a five-year detour via Singapore en route. The outfit they brought with them to their interview consists of a satin coat by Olivier Theyskens with ruched shoulders and panel detailing, worn usually by An as a dress with nothing underneath but a tight top and a pair of ballet shoes. An bought the coat-come-dress, a collectors’ item from 2001, in 2016 – a time when they first began gaining the confidence to wear clothes that reveal a lot of their body. Debuted at a friend’s birthday party, this piece marks a very important and pivotal moment in An’s life, they explain.

An initially began expressing their identity in their first year at the University of Brighton with delicate fabrics such as satin, crepe and fine knits, before moving on to more obviously, traditionally feminine styles (balloon sleeves, dresses, high waists, etc.) The freedom to experiment with light, soft pieces was a relief after life in Southeast Asia, where heavy garments are traditionally employed to assert masculinity.

‘I don’t think I started exhibiting queer until I got to Brighton. It’s the first safe place I’ve had. I’ve got a close circle of friends so as that started to develop, I’d exhibit more and non-conform.’ An recalls the school dress codes in Singapore and the way in which gender is still heavily policed. ‘It’s frowned upon to be out-there.’ Whilst An has always known they were queer, they would never admit to their friends in Singapore that they are gay. ‘They haven’t even lifted the ban on homosexual sex yet, so to keep it safe I stayed low-key. My parents still don’t know I’m gay.’

An draws huge inspiration from actress, model and fashion designer Chloë Sevigny, fashion writers like Alexander Fury and Sarah Mower, and designers who push a queer aesthetic, such as Gypsy Sport. An aims carefully for a queer aesthetic in order to communicate their non-binary identity to save themselves from having to explain it, or offer it as a prerequisite, over and over again. ‘In a way I dress to filter out people. In dressing yourself provocatively towards the non-binary you get the sense that people who are not supportive or not understanding of queer looks will stay away from you – and you think “Good, stay that way”. Then you’re actually just stuck with the people who you enjoy.’

And how does An feel walking the streets of Brighton in these ‘provocative’ ensembles? ‘In Brighton it’s cool,’ they shrug. ‘It definitely feels a lot safer. I wouldn’t do it when I visit my sister in Guildford, or even in London.’ An believes this is a shame – that nobody should ever have to consider whether or not they can ‘get away’ with dressing in a certain manner. ‘If you feel a certain way I think it’s always ideal that you can exhibit it. One way I can do that is through clothing because sometimes words are not enough.’

An’s feelings towards the gender spectrum vary from day to day. Sometimes they’ll opt for menswear, sometimes for womenswear, and sometimes for a ‘Frankenstein’s’ amalgamation of all of the above. ‘Because it’s so inconsistent, I don’t ever feel as though it’s adequate enough for me to explain for someone the definition of non-binary.’ That’s where clothes help.