Adrian’s Queer Look is an armour Vivienne Westwood jacket from the late ’80s and a pair of jeans bought from her King’s Road World’s End boutique around the same time, a John Bull hat, a pair of John Moore shoes, some Westwood orbs and a ‘hideous’ Westwood shirt. ‘Being from Essex, you wanna move to London and see everything that’s going on in London. Westwood was a big designer in the ’80s and all the bands I used to listened to used to wear Westwood. I used to save two weeks’ wages and go up there and do some shopping.’ This routine of saving purely to shop didn’t really change for a long time. By the time he’d eventually moved into the capital, clothes were still highest on Adrian’s priorities. ‘I’d spend a quarter of my monthly wages on a shirt. By the end of the month I’d be living on a couple of samosas a day and a packet of Marlboro.’ 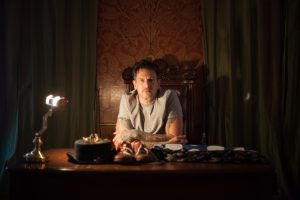 On buying his first ever Westwood shirt as a teenager, Adrian was taken aback by the cost. ‘There’s no prices there. Because you’re young and trying to be cool you don’t wanna be gauche and ask what the price is. So when he said to me “It’s 80 quid” – it was in the ’80s – I was a bit shocked.’ Adrian recalls the shop assistant putting his name on guestlist for a club night that evening – probably out of sympathy. ‘But because we were plebs from Essex, we went home anyway.’

Why Westwood’s clothes? ‘Being young, you think you’re a bit of an individual – but then when you go clubbing, everyone’s got them on. And that’s the thing – it’s sort of like being part of a club. Being gay and living in Essex, in the suburbs, you don’t ever feel like you fit in. So when you go to London and you see people like you, dressed like you, you feel normal. For me, the clothes were being part of a tribe.’

This era was a hugely significant time in Adrian’s life. ‘I was getting to find out who I was. Because of the times, I probably wasn’t very comfortable with it; I probably didn’t wanna be gay. Especially with things like AIDS and Margaret Thatcher. Basically, it was a homophobic time. But the flip side was, I went clubbing and had an amazing time. Went to amazing clubs, saw amazing people. Got drunk, slept with someone for the first time. It was a dichotomy of having an amazing time because I was young, and finding it difficult being who I was.’

And Adrian’s inspiration? ‘Debbie Harry. The post-punk aesthetic.’ He loves the rock ‘n’ roll aspect but at the same time, doesn’t like anything that looks too ‘done.’ ‘I like to look like I’ve not made too much of an effort, even though I probably have. I’m a mess, really. I like to look messy. Deconstructed but still look great.’ 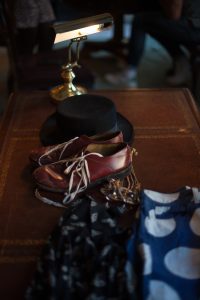 Whilst nowadays Adrian subtly channels Debbie Harry vibes in a low-key, ‘masculine’ way, through ‘muddy hair’ and shabby clothing, his past aesthetic was more gender fluid – from a John Richmond dress with jeans as a day-to-day look, to full drag when partying regularly in an East London drag haunt on the weekends. ‘Drag was like being another person. You’d act differently. It was a new extension to taking drugs – you then become someone else again through what you wore, rather than through taking something.’ But this was just a phase – though an important, self-exploratory one at that, Adrian feels. ‘Doing drag made me realise “Yeah, I’m quite happy being a man.” I’ve got this horrible old ’70s dress that, when I’m pissed, I might put on and roll around in the garden in’ – but that’s about as far as it goes today.

Like many people find with age, 50 year-old Adrian treats clothing more of a functional utility than 17 year-old Adrian once did. Whilst still a hugely important aspect of his life, they are no longer a means of drawing attention to himself, enabling himself to feel interesting or provoking a reaction. ‘As I’ve got older I’ve obviously obtained a personality from somewhere. As a child or young person I felt invisible. I wanted people to notice me. In a way, I still do – but for other reasons. I don’t want it to just be my clothes.’ 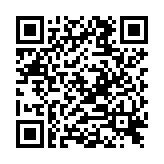