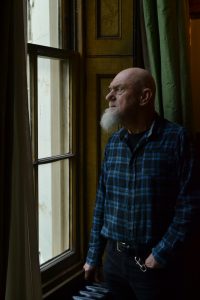 Graham moved to Brighton from London in 1994, driven primarily by a job opportunity but also nudged by his love of the city after many a weekend spent cutting shapes in its infamous seaside bars and clubs. Back in the late 1980s Graham, a retired community psychiatric nurse who identifies as a gay man, ran the LGBT Society at the University of Portsmouth, regularly piling everyone into the university’s minibus for trips along the coast to Brighton for Wednesday nights at The Zap. It wasn’t all a hoot, though; with the HIV crisis, debates about age of consent and Thatcher’s pushing of Section 28 forming the backdrop of the 1980s, Graham and his fellow society members had a lot to fight for.

At the time of his regular Brightonian jaunts, Graham also frequented the Beacon Royal Hotel bar before its owners fell out with one another, leading to one half of the pair, Tony Chapman, opening up Club Revenge in 1991 as a victorious form of payback for the bust-up. Graham remembers Revenge in the early 1990s as an alternative goth club; though not quite as offbeat as Schwartz, the leather and rubber fetish club nestled in the basement of what we now know as Legends, renowned for the opportunities for BDSM sex that it offered up behind closed curtains. Then, when the parties at Revenge and Schwartz had wound up in the small hours, the after-party came in the form of the cruising scene of Black Rock and Hove seafront. “We used to leave at about 3 o’clock and go and walk along the seafront and there’s lots of sex,” recounted Graham. “I remember sitting on the beach one night and watching the West Pier burn.”

But, like most of these eclectic venues, “That’s all gone now. Gone into the apps.” As has, he reminisces, Wild Fruit; the hugely successful monthly event on West Street. Brighton’s gay scene was much more important then than it is now, Graham feels – probably due to its LGBTQ+ community feeling more welcome city-wide than ever before. “It was a community almost, a club community… It’s not the same now. These days the gay scene’s almost gone.”

The garment that Graham has brought to the Queer Looks table is a pair of red braces, a remnant of his skinhead years in the late 1980s and early 1990s; a look he refers to as “butch drag”. Whilst many of the people around them were dressed in leather or rave wear, the trend of the time, Graham and his friends would dress for those fabled nights at Revenge and Schwartz in bleachers (tie-dyed jeans), Ben Sherman shirts, 18-hole Dr. Martens and, naturally, a set of braces. Though, of course, “These people weren’t right-wing skinheads at all – they were gay guys dressed up to try to look tough.” At the time, Graham explains, “People actually met each other, not virtually” – and your choice of dress was about projecting what you were into. “What you’re saying about yourself by dressing up as a skinhead is not a fetish thing, but it’s about trying to appear macho… Some people are pretty and if you’re not pretty, you might as well be butch.”