is there a generic for paxil how long does paxil take to work paxil over the counter equivalent paxil 12.5 mg extended release mixing paxil with alcohol paxil dosage for hot flashes is paroxetine the same as paxil buy cheap paxil

Anthony is 27, lives in Brighton, performs under the name of his alter-ego, Alfie Ordinary, and he identifies best with the ‘Q’ end up of the LGBTQ spectrum. ‘Queerness isn’t necessarily about sexuality; It’s more of an identity. It’s a rebellion, not necessarily against heterosexuality, but against capitalism and a general way of life.’ 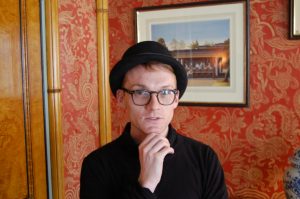 Alfie Ordinary is the son of a drag queen – a drag prince. There are two strands to his aesthetic, Anthony explains. He should always look like a boy, hence the Sunday school uniform-inspired shorts, collared shirts, bow ties and knee-high socks – all of the ‘boring’ items that boys and men are expected to wear – but there’s plenty of room for rhinestones, velvet and sequins, too. A padded bottom creates the illusion of a shorter body and a longer leg, whilst the large bowl-cut wig shrinks the face. ‘I don’t aim for realness,’ Anthony tells us. The sparkly aspects of Alfie’s get-ups reflect his desire to serve as a light in the dark. Anthony recalls a woman approaching Alfie once to say ‘I wish I could dress like this!’ and Alfie’s response being ‘You can!’ ‘I guess that’s part of the point of drag,’ Anthony muses. ‘It’s pushing the boundaries and saying “I’m dressing like this and you can too”.’ 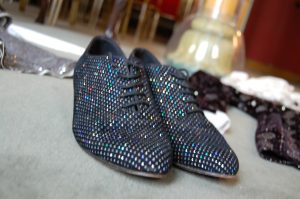 The ensemble that Anthony selected as his Queer Look is the outfit he wears in Help! I Think I Might Be Fabulous, the show he wrote and has been performing around the world for the past few years. The performance tells the story of Alfie coming to the realisation that he is fabulous, drawing a parallel with the familiar coming out narrative. Alfie attends a school for fabulous boys, where he meets another boy called John, who is muggle-born – a Harry Potter reference, alluding to the fact that neither of John’s parents are fabulous. John struggles with his identity, in part thanks to his mum’s lack of understanding of his fabulousness. All of the things that John’s mum says are the same things that Anthony’s mum said when he was growing up.

Alfie’s style has taken a while to evolve and get right, Anthony feels – he’s been a work in progress. Many of his outfits have been custom-made by Laura Nixon, who has fashioned garments for a lot of Brighton’s drag performers – and Anthony feels that her ideas have been a massive influence on the development of Alfie’s character and appearance. 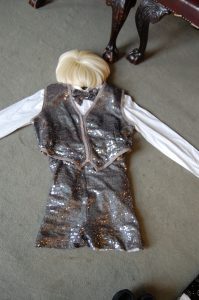 Anthony identifies that drag is mostly based in the realm of nightlife, and is pleased that his daytime interaction at festival and theater performances has offered the opportunity to generate real discussion. ‘Drag is an elevated persona, whether it’s part of your own persona or a new one you’ve made up. It draws attention and opens conversation, which is great. You can get to a different ground with people whereas you might not necessarily just wearing jeans and a t-shirt. Suddenly if you’re in sequins, eyelashes, a wig, you can start conversation.’

Unless going custom-made, Alfie tries to avoid acquiring garments new. ‘I love wandering around charity shops and finding old pieces that people have gotten rid of. They’ve got their own stories. I enjoy the challenge and the excitement of finding something that someone else might not have. I can’t stand going into H&M and Topshop and just seeing lines and lines of the same things.’ Day-to-day, however, Anthony does opt mostly for ‘downtime’; black, casual and low-key. This is subsequent to finding drag, he feels. ‘You let go of trying to fit in, or stand out, because you’ve created your own unique person that you can get out of a cupboard and wear during shows and on evenings out. My day-to-day fashion choices took a back seat, but in a really positive way. I didn’t really mind how I dressed – you let go of that “People are judging me” thing.’

Moving to Brighton helped with this sense of relaxed self-confidence, too. Having grown up in Chichester, West Sussex, Anthony loves living here now. ‘Brighton was always my town – I was always drawn to the city. I always yearned for a bigger place. Unless I’m running late, I’ll walk to anywhere I’m performing and I never have any problems. People might shout at me, but they’ll just say “You look fabulous!” I know we’re lucky here. I know that it’s quite a welcoming, warm place – inclusive and accepting.’ That’s not always the case elsewhere, though, Anthony is keen to point out. He recalls being called a faggot by a passing driver in Portsmouth a while back, before looking down at his head-to-toe sequinned get-up, and thinking “Erm… I know!” Discovering drag, moving to Brighton – it all came together nicely at the same time and helped Anthony settle into himself. ‘It’s empowering to be at peace with who you are.’