Scarlett brought to her interview her Brighton Pride 2017 ‘evening look’; black PVC hot-pants, a black mesh top, worn with a black PVC bra underneath, a black velvet body harness and a black studded choker. That night, Scarlett hosted her club night, Gal Pals, which had a turnout of over 400 merrymakers, and this ownership of space left her feeling confident, as though she could wear anything she wanted. 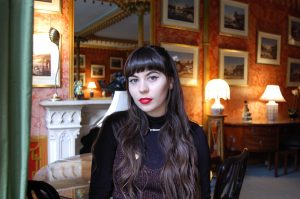 Historically, fashion has been high on Scarlett’s list of priorities. ‘I’ve always really been into clothes,’ she tells us. ‘I like getting dressed up.’ It’s difficult, though; Scarlett’s love of dress is now somewhat at odds with her conscience. ‘There is no ethical consumption under capitalism. I have this guilt and that’s why I’m not so much into fashion any more because the whole industry is so awful… Every time I buy stuff online I’m just overwhelmed by how much packaging comes with it, and how cheap it is, and where all these clothes are being made, and the “fast fashion” thing where you just throw things away. It’s all so bad.’ Scarlett studied Fashion Photography in London and it was during this time that she began to realise that perhaps she didn’t love the fashion industry as much as she once did, instead discovering newfound interests in feminism and politics and beginning to approach fashion from a feminist perspective. ‘I just thought: “How can I say I’m a feminist if I’m just perpetuating all these terrible things?”‘

Scarlett describes her style as ‘glam’, though she aims not to appear too ‘put-together’ or normative – and she really identifies with the term ‘hard femme’. This is reflected in her coupling of fishnet tights and Dr. Martens with femme aspects, such as skirts and makeup. She often uses slogan t-shirts, badges and denim jacket patches to signal her queerness. ‘Being femme, people don’t always see you,’ she explains. ‘Everyone always thinks you’re straight unless you’re literally holding a girl’s hand.’ It’s little touches such as her ‘dyke’ denim patch that plays on the Nike logo and her ‘Femme as Fuck’ t-shirt that help to set people straight on that front. ‘I know a lot of people feel that pressure [to be visible] when they’re coming out, so end up being quite butch, but I couldn’t do that – it just felt wrong for me. I was never gonna change the way I look. I wanna wear red lipstick every day.’

It’s women in film, TV and music that influence Scarlett’s way of dressing; Twin Peaks‘ Audrey Horne, Clueless, The Craft and The Doom Generation. She also draws inspiration from witches. ‘Witches were basically women who broke outside of society’s norms. They challenged patriarchy and were powerful women. It’s one of the stereotypes about women that are used as a negative thing but they’re actually really cool and really powerful.’

Not only does Scarlett co-run her own club night for queer women, but also manages a femme zine for queer and non-binary readers that she strives to make as representative and inclusive as possible, currently working on a diverse portrait project. Anger was initially the driving force behind the scene; looking around last year, Scarlett realised suddenly that mainstream fashion brands were beginning to cluelessly co-opt ‘femme’ and detract from its queer significance. Seeing the phrase ‘The Future is Female’ on t-shirts in high street shops really irks her, too. ‘It was once a 70s lesbian separatist t-shirt and then they started selling them in Topshop. This is a very gay thing and all these straight people are wearing it.’ 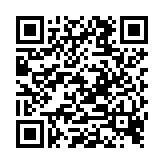