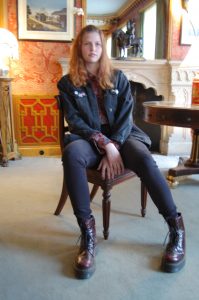 Isis began her life in Wales, grew up in Spain and managed to persuade her mum to move back to the UK a few years back so she wouldn’t have to take Spanish A-Levels – which is how she’s wound up here with us in Brighton. The majority of her childhood was spent in a small town on the outskirts of Madrid that she describes as ‘really conservative’ and pretty uninspiring. ‘Everybody was mostly 60 year-olds who wore leather – and I’m a vegetarian.’

Isis identifies as queer, because she feels that it’s an umbrella which covers gender as well as sexuality. Her Queer Look is an incredible drag ensemble, consisting of a red wig, a navy and white pinstriped blazer, black fishnet tights, a black corset and a pair of black patent platform heels. Underneath the corset she wears a black bodysuit and pads to bulk out her derriere, hand-cut from shape control pants. ‘I like to mix things that are masculine and things that are feminine,’ Isis explains. Underneath the hyper-femme, glamorous aspects of her drag outfits, she uses tape to bind her chest. ‘I like to look like a man and a woman when I’m in drag.’

Isis put this outfit together in preparation for a night at Her Upstairs, an LGBTQ+ cabaret club in Camden with a focus on alternative queer drag and performance by people of colour. Having turned 18 only fairly recently, and describing herself as shy, Isis tells us that these sorts of nights out are all new to her. ‘I don’t really like going places with lots of people, but I try and do it because it gives me a lot of inspiration for art and stuff. I probably should do it more.’ 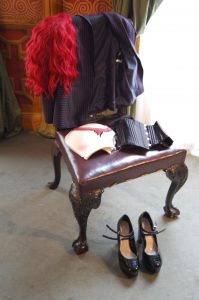 What’s life like for the A-Level student when she’s in drag? ‘Well, it’s quite painful, actually. But apart from that it’s really good, because it makes me feel like a different person, and I quite like that feeling. I can be completely different to the way I am usually and I don’t have to be shy. I think you show who you are on the inside through what you wear on the outside.’ That’s why Isis began experimenting with drag in the first place. ‘In my day-to-day clothes I tend to dress quite boring, in dark colours. When I go to college I try and tone it down a bit, because I don’t want people to look at me; I don’t like to stand out… I don’t particularly like it, but I do it anyway because I don’t want to draw attention. I’m really tall and I kind of make myself a bit smaller. When I’m in drag I wear really high heels and I like the fact that I’m really, really big. When I get into drag, I make a deliberate effort to not be as shy as I am normally.’

It was RuPaul’s Drag Race that originally captured Isis’ interest and still she’s constantly looking to other queens for style inspiration, her favourites being Adore Delano, Bianca Del Rio and Detox. It’s their personalities that motivate her the most. ‘They’re very outgoing, which I’m not.’

Right now, Isis feels that her drag aesthetic is still a work in progress and that she’s not yet found her signature look. ‘I’m getting there.’ 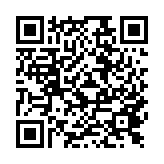