Candice grew up in London but moved to Brighton seven years ago to study and hasn’t left since – they feel at home here more than they ever have done in the capital. Brighton was the first place they were able to properly express themselves and thus the place where they really begun to come to terms with their gender, Candice explains. ‘It was the first place that I could make decisions about what I wanted to wear and where I wanted to shop. Since then I haven’t really looked back.’ After a few months living in the city, Candice recalls one of their closest friends telling them ‘You’re more Candice than you’ve ever been.’ 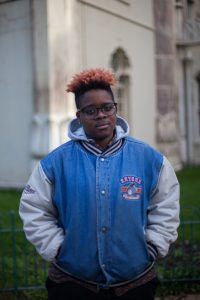 Candice identifies as non-binary queer and feels that this ties into the way that they’ve never referred to themselves as a lesbian, but simply as gay. ‘I knew I was gay when I was about 14 or 15. It was literally a penny-drop moment when I thought: “Ah, this explains my whole life.” I had a flashback to when I was 4 years old and I really wanted to be friends with this girl I didn’t know. I don’t know what was going through my mind but I just knew that I really wanted to make her happy, which is the purest manifestation of being gay.’

Candice’s queer look is an outfit they’d like to wear all the time if they lived in a climate that would allow it; denim shorts, a flannel shirt and a t-shirt that brandishes the slogan ‘Black History is World History’, designed by their friend Barbara, who’s behind politically-inclined clothing brand, Sassy Tees. ‘The flannel is a comfort thing. It’s comfortable in the sense that it’s like wearing a blanket… But also it’s that throwback. It’s the first thing I ever bought in the menswear department and made me think: “Wow. This feels really gay to me”.’

Clothes are hugely important to Candice; a far more important aspect of their morning routine than breakfast. ‘The hardest decision is: “How do I face the world today? What do I want to put on that’s going to communicate my mood? What’s the impression I’m going to make on people and the people I meet on the way?”‘ Oversized clothes that obscure parts of the body are a regular go-to. ‘It’s more ambiguous about what I am – because I don’t really want people to think about that. I want people to think “That’s a really great outfit” or “This person looks good”, not looking at parts of me that I don’t like or don’t want to draw attention to.’

Candice, who is a DJ and co-runs Gal Pals, an ‘unapologetic pop party’ playing music exclusively by women and for women, enjoys dying their hair crazy colours. They stretch their ears as a means to deter people from ever buying them jewelery that will feminise their face as a teenager and has a tattoo decorating each of their limbs, including one reading ‘wavy WiFi’ symbol (because they’re a self-confessed ‘massive nerd’) and one reading ‘Either/Or’, hand-poked by one of their friends. ‘I’ve always wanted an Elliott Smith tattoo; he’s my favourite singer/songwriter. I liked ‘Either/Or’ because of the gender stuff. Either/or, maybe both, maybe none. You don’t have to choose.’

In terms of prejudice, Candice’s general experience is that the first thing people tend to notice is that they’re a person of colour; their queerness tends to be noted second. ‘The majority of interactions with strangers that have been negative have been based on my skin colour instead of on me being queer; that’s not the first thing that they’re gonna hold over me to make themselves feel powerful and me feel bad.’ They have found solace in the internet over the years. ‘There’s so much more community online now. Realistic depictions of people’s lives are so much more widely-available now. I’d feel so much less alone than when I was young; I only ever saw white lesbians. I’m lucky in this place now where I have a really good, healthy feed of positive imagery of black queer people and black queer lives and black queer love. I’m really happy for people in that position but it was definitely very light on the ground when I was younger. I feel like now, I don’t feel so alone.’ 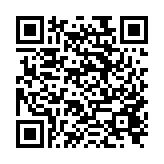